National Grid Wireless, who own and operate public broadcasting infrastructure, are proposing to erect two 50m radio masts with a building at the base, all in a fenced compound, at Tubb's Bottom near Iron Acton. These would replace two currently sited at Emerson's Green on land that is due to be developed.

The proposed site is on the border between Westerleigh and Frampton Cotterell Parishes. I asked National Grid Wireless to attend the Westerleigh Parish Council meeting at 7.15pm on Monday 3rd September to give a presentation on the proposals. Members of the public are as always welcome at the meeting. I also intend to make a site visit with their representatives.
Posted by Unknown at 10:01 No comments:

Our sister blog has a very comprehensive post about the Beech Hill Farm tipping application, including a useful aerial view of the site. Full details of the application, including the replies received so far during the consultation, can be found here on the South Glos website.
Posted by Unknown at 23:29 No comments: 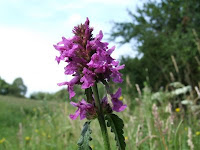 A recent survey by experts found that the wide range of species at the Lower Meadow at Wapley puts it in the national top grade of grassland. It's of a standard to be considered a Site of Special Scientific Interest, but this is only done if the site is at risk.

Paul Hulbert, a member of the Wapley Bushes Conservation Group, said “This is great news, and confirms that our management plan is working”.

“However, some local people have asked why the Lower Meadow has been cut earlier than usual. This is based on expert advice to stop the spread of meadowsweet and other invasive plants. It's a compromise - some of the valuable species have only partly set seed, but they could be in danger of being strangled”.

Wapley Bushes also has its own blog (online diary) with lots of photos of the reserve – see www.wapley.blogspot.com.
Posted by Unknown at 22:19 No comments: 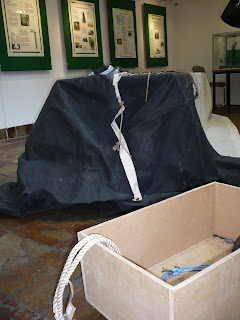 Today I took my two sons to the Children's Activity Day at Yate Heritage Centre. The subject was mining and it coincides with an exhibition about Ram Hill Colliery that runs until 13 September. There was a mock-up of a tunnel which children could crawl through pulling a sledge (pictured right) and a haulage system for lifting coal to the first floor.

Those interested in the mining history of our area might like to join one of the guided tours at Ram Hill Colliery, running from 10am on Sunday 9th September. More details on this and other Heritage Open Days can be found in this leaflet.
Posted by Unknown at 23:58 No comments: 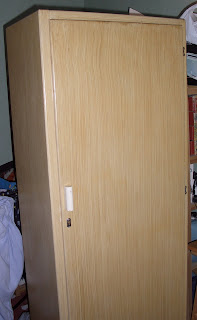 If you have old, unwanted furniture taking up space in your house, rather than requesting a bulky waste collection from the Council or struggling to take it to a Civic Amenity Centre, why not donate it to someone who can make good use of it? The Kingswood Furniture Project recently took a wardrobe (pictured) and a rocking chair that we no longer used. It was very easy to arrange, I simply called them on 0117 961 6226 and they gave me a date when the van would be in my area.

The Sofa Project (0117 954 3567 or online at http://www.sofaproject.org.uk/) offer a similar service but ask for a donation to cover the cost of collection.
Posted by Unknown at 00:21 No comments:

I had a meeting today with Network Rail regarding a number of outstanding issues in the Coalpit Heath area. Residents may be aware of work being done on the line, this is part of the final phase of a four-phase project to relay track, due to be completed in mid-September.

If residents have any concerns relating to Network Rail, they can contact them using their helpline number, 0845 7 11 41 41. This has agreed response times and problems will be passed to the appropriate team. For more information, including how to email or write to them, click on:

Because of maintenance work on the central reservation of the A4174 Ring Road, the outside lane on each side of the carriageway will have to be closed on the dates and stretches shown below.

Monday 20th August - "MoD" roundabout to J1 M32, including the latter roundabout itself.

More information on all road works in South Gloucestershire can be found at: http://www.southglos.gov.uk/Legacy/public/PublicServices/roadreport/roadWorks.asp
Posted by Unknown at 17:05 No comments:

The high friction surface has now been laid on the sharp bend in Westerleigh Road opposite Broad Lane. The aim is to reduce the number of accidents caused by vehicles losing control on the bend.
Posted by Unknown at 00:30 No comments:

There is an informal public consultation underway regarding the proposed diversion of two public footpaths in Tubb's Bottom. For more details see http://www.southglos.gov.uk/Legacy/public/Consultations/consultation_details.asp?id=1623
Posted by Unknown at 22:33 No comments:

On Thursday I attended a meeting organised by Safer and Stronger South Gloucestershire to discuss the problem of youths congregating on the Beeches Trading Estate. Residents had complained about the noise from youngsters reving car engines and playing loud music, sometimes into the early hours of the morning.

The meeting gave residents the opportunity to hear what action was already being taken and to join in the discussion with the various agencies about future plans. An action plan was drawn up and one important outcome for residents was an agreed procedure for reporting incidents, so they know who to contact and can be confident that everyone involved is aware of what is happening.
Posted by Unknown at 22:59 No comments: