You can now find full details of the new recycling collections on the Council website.
Posted by Unknown at 09:30 No comments:

Ever wondered how to tell the difference between mushrooms and toadstools? Find out on Monday 1st November at Wapley Bushes. Meet at 2pm at the Shire Way entrance for a two hour foray with Justin Smith.
Posted by Unknown at 09:15 No comments:

South Gloucestershire residents will have to get a massive 2,500 signatures on a petition to require their Council to debate an issue after Tory and Labour Councillors blocked Lib Dem plans for a lower figure.

At last week's Council Meeting, the Lib Dems argued that 500 was a large enough number to deter time wasters and said there should be the option to debate any petition or explain why not. They expressed concern about the impact on people in rural areas, as small communities would struggle to get 2,500 signatures.

Frampton Cotterell Councillor Pat Hockey said, “If we send out the message that we are interested in the issues raised by petitioners and ready to debate them, they may come along and make Council meetings more lively and worthwhile. If 500 people want their Council to debate something then I certainly believe it must be important and that it is our duty as a listening council to do so.”

Dave Hockey added, “The Council claims on its website that ‘We’re committed to getting involved – working with, listening to and involving local people in our decision-making and action.’ Our proposal would have put those words into action. Why are the other parties so afraid of discussing what local people would like to be done?”

Pat Hockey explained the reasons behind the Lib Dem proposals on Radio Bristol this morning, just after the 7 o'clock news.
Posted by Unknown at 23:59 No comments:

Email ThisBlogThis!Share to TwitterShare to FacebookShare to Pinterest
Labels: open

Look for owls at Wapley Bushes

On Monday 25th October you can join Ian McGuire for a twilight walk searching for owls at Wapley Bushes. Meet at the Shire Way entrance at 7.30pm.
Posted by Unknown at 09:15 No comments:

Are you interested in forming an archaeology group and undertaking research into your local historic environment?

If you are interested in forming a group, are part of an existing history society who would like to start doing archaeology, or are an already existing archaeology society, contact Paul Driscoll on 01454 862175 or email paul.driscoll@southglos.gov.uk .
Posted by Unknown at 10:47 No comments:

The 2010 South Gloucestershire Engage Festival is taking place on Saturday 16 October at the WISE Campus, Filton between 10am and 6pm. More than 250 performers will be taking part in a variety of live performances, youth and environmental activities, interactive information stalls, and an impressive feast of Indian, Mediterranean, Chinese and British food. For more information, visit the South Glos website.
Posted by Unknown at 09:15 No comments: 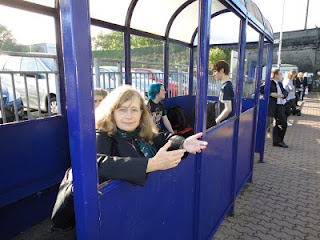 Rail user, Chris Willmore (pictured above), has slammed First Great Western's decision to leave Yate commuters with no shelter from the rain whilst they wait for their train.

At the best of times it is a scramble for the hundreds of commuters waiting for morning trains from Yate to Filton and Bristol to find space in the tiny shelter. But now, even the shelter will not protect them from the rain. All but one panel of the shelter is broken, and rail users were horrified when First refused point blank to repair them.

Chris Willmore, who reported the problem and asked for action said, "This is mad. It leaves users with no shelter. There had been some vandalism, but the police have caught the culprit. Now we need the shelter back. Otherwise we are saying the countless decent rail users, who pay huge sums to use the train must wait in the wind and rain, unprotected. I can see why they didn't repair it whilst the culprit was at large, now he has been caught they should restore it."

"We will be taking it up with First face to face at the next Yate Station Users Group - but frankly First seem more interested in trying to persuade passengers to plant flower beds than actually providing a service to train users."
Posted by Unknown at 09:15 No comments:

“Windmill Green” has now got its reserved matters consent. This means that building can go ahead in line with the final plans which can be viewed on the South Glos website. Dave and Pat Hockey have pointed out that this is a very unsuitable name and understand that it may be changed to a name that they suggested, The Meads or Frampton Meads, which reflect old field names.

Your Focus Team was disappointed not to get the main play area relocated to a more central position. This was not possible because the Government Inspector that over-ruled the Council’s refusal of planning consent, agreed this location as part of the outline planning permission. The pedestrian access off Park Lane has been moved further away from the bend and South Glos Planning Officers haveagreed to try to persuade the developer to fund a safer way of getting across this busy road. We are assured that the arrangements for play both on this area and throughout the site will be exciting and interesting for children of various ages.

The shop is still included in the plans but Barratts have indicated their intention to put in a further planning application to replace it.
Posted by Unknown at 17:40 No comments:

Link Road will be closed for five weeks while preparatory works are carried out for the extension to Yate Shopping Centre.

However, shoppers will still have access to the Shopping Centre and the Total petrol station from the Kennedy Way direction on a temporary access road. Buses will also access the existing bus station along this temporary road. Traffic can then rejoin Link Road by taking a left turn out of the shopping centre car park.

Traffic wishing to use the overflow car park can access Link Road from the Station Road end and will have to leave by a right turn. All other traffic that normally uses Link Road will be diverted along Kennedy Way and Station Road.

The aim is to get the disruption out of the way before the busy Christmas opening in late November.

The contractors will be widening Link Road on the eastern (overflow) side; diverting the cycle and foot paths; infilling the Link Road underpass; and installing traffic management measures. The bus station remains unaffected although work will follow to build the new station ready for opening early in 2011.
Posted by Unknown at 14:06 No comments: