Requests from the community police team

In the run up to Halloween, if you have any problems with youths etc, please report them as soon as possible. Police/PCSOs will be patrolling on the 31st October.

Graffiti is becoming an issue in side streets, in the Coalpit Heath/Frampton Cotterell locality. If you see anyone in the process of spraying paint dial 999, or if you notice graffiti at a later time please advise the community police team of the location.
Posted by Unknown at 22:06 No comments:

You have until Tuesday 4th November to have your say. It is vital that everyone who has views makes them clear to the planners by letter or email before the deadline. It would help your local Focus Team to represent your views better if you could let one of your Focus Team and your Parish Council have a copy.

You can view the plans online or drop in to the Brockeridge Centre on any weekday morning.

Frampton Cotterell Parish Council will be deciding their comments on 27th October at 7.30pm at the Brockeridge Centre. Parishioners are welcome to attend and give their views. We expect South Gloucestershire's Planning Committee to make their decision in a meeting starting at 2.30pm on 11th December in the Council Chamber at Thornbury Council Offices after visiting the site on 28th November. It will help them know the importance to local people if you attend, but please check before you go by phoning the Council on 01454 864425 or by contacting one of your Focus Team.
Posted by Unknown at 22:26 No comments:

Officers explained that the Council consultation was only about the closure, there will be a separate consultation run by the lead sponsor of the Academy proposals, The Ridings School, on those proposals. Meetings for that will be held on 10th and 11th November, while the deadline for comments in the Council's consultation is 14th November. Parents were concerned that they were being asked to comment on the closure without knowing the full details of the Academy proposals.

You can read the Council's consultation documents on the South Glos website. For the latest information on the Academy proposals, go to The Ridings' website.
Posted by Unknown at 09:46 No comments: 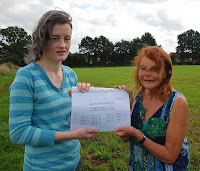 The deadline for comments on plans to build 32,800 new homes in South Gloucestershire over the next 20 years is 5pm on Friday. You can make your comments online or you can download a response form to complete and email or post back to the Government Office of the South West.
Posted by Unknown at 09:34 No comments: 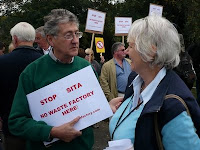 SITA have submitted amended plans for a composting facility near Tormarton. There will be a new round of consultation ending on 24th October and the application will not now be considered by the planning committee on 30th October as originally planned.
Posted by Unknown at 22:54 1 comment:

On Tuesday 21st October, work on widening the A4174 ring road at Hambrook will start at 9.30am as usual but will continue on beyond the normal end time of 3.30pm (weather permitting). This is because the surfacing work needs to be done in one go and cannot be completed in the restricted hours. There will be fewer lanes in use than normal and the traffic lights will be adjusted to keep traffic moving as best as possible but there will inevitably be delays.
Posted by Unknown at 22:50 No comments:

Email ThisBlogThis!Share to TwitterShare to FacebookShare to Pinterest
Labels: a4174, roads, roadworks

Do you know an outstanding sports person or coach?

To find out more, visit the South Gloucestershire website. The closing date for entries is Monday 27 October.
Posted by Unknown at 21:42 No comments:

Email ThisBlogThis!Share to TwitterShare to FacebookShare to Pinterest
Labels: sport

Roadworks outside Westgate House on Tuesday

There will be temporary traffic lights outside Westgate House, Westerleigh on Tuesday 14th October so that a new water supply can be installed.
Posted by Unknown at 21:40 No comments:

During the House of Commons debate yesterday on the massive housing developments proposed for South Gloucestershire, Communities Minister Iain Wright described the principle that brown field (previously used) land should be built on before green belt as "rigid and old-fashioned", and said that what was needed was flexibility.

“Every MP who was at the debate was shocked by what the Minister said. He said that the green belt was fair game.

“We cannot tell developers to go to the brown field and developed areas first. They can go to the prime sites on day one. It was a disgrace.”

The debate was arranged by Steve Webb after the government raised the number of proposed houses by 50% despite already overburdened roads, inadequate bus services and minimal train services.

Steve describes the debate here. You can read the debate in full or watch it (for the next 28 days).

Whether you signed the petition or not, it's still important to put in your comments to the government. The more voices they hear, the more likely they are to tone down their plans. You only have until 24 October. If you would like to object to the Government's proposals on housing, but don't know what to say, you can click here to download some suggestions: Word version
(Note - we've had occasional problems with this link - if it doesn't work for you, please email paul.hulbert@gmail.com for a copy)

Use our 'specimen' as a guide – but put it in your own words, because people take more notice of personalised objections

Send completed forms to the email or postal addresses on the form to reach the Government Office for the South West not later than 5.00pm on Friday 24th October

This is important. Please do it NOW.
Posted by Unknown at 23:49 No comments:

1) Bad behaviour on the roads - speeding and parking issues
2) Streetcare/Highways issues - a pedestrian refuge on Church Road, vegetation around road signs, white lines on corner of Ram Hill/Broad Lane
3) Anti-social behaviour at a number of locations
Posted by Unknown at 23:11 No comments:

Due to the refurbishment of Yate Libary, it will be closed from Wednesday 29th October 2008 until Sunday 2nd November 2008 to enable the service to transfer stock and IT equipment to temporary premises.

From Monday 3rd November 2008 until December 2009 the service will be operating from those temporary premises at 23 South Parade in Yate Shopping Centre (next to Adams and opposite Lidl). Due to the space within the shop they will only be able to offer a limited service compared to the normal service provided at Yate Library. The opening times will be the same as for the current library.

Chipping Sodbury Library (which has recently been refurbished) will also be open at the following times: