Call for help for small businesses

At tonight's full Council meeting, Councillors will be debating a Lib Dem motion calling for the Council to help local businesses in the current economic difficulties. You can read more in the Gazette.
Posted by Unknown at 14:01 No comments:

Email ThisBlogThis!Share to TwitterShare to FacebookShare to Pinterest
Labels: economy

Network Rail have apparently agreed to pay all the costs for relaying pipes on the Shire Way Community Association Land and the other side of the railway track, which will hopefully address the flooding problem on Besom Lane. They were hoping to do this last year but a survey of flora/fauna has to take place first and that will be done in April.
Posted by Unknown at 23:33 No comments:

Have you had your say on the Gypsy and Traveller consultation?

The formal deadline for the end of the Gypsy and Traveller consultation is this Thursday. However, if you want to comment but cannot do so in time, it's worth talking to the officers at South Glos. After Westerleigh Village Residents Association successfully secured an extension for their response, the consultation website says:

The consultation formally closes on Thursday 29th January 2009 but if for any reason you are unable to submit your comments to us by 29 January 2009, please contact us to discuss your representation.

It's vital that everyone's concerns are heard and it doesn't matter whether that's online, by email or in a letter.
Posted by Unknown at 22:00 No comments:

Have your say on health care locally

The LINk’s interim steering group meetings are open to anyone who wishes to attend. The next meeting will be attended by the Project Manager for the Frenchay project who will be there to talk about the plans for Frenchay as a Community hospital. This meeting is on Wednesday February 4th from 2pm until 4pm at Hawkesbury Village Hall, High Street, Hawkesbury Upton GL9 1BB.

If you're interested in giving your views on the new health centre in Yate, a public consultation event is taking place on Wednesday 11th February 2009 at Chipping Sodbury Town Hall.
Posted by Unknown at 22:46 No comments:

Have your say on cultural strategy

South Gloucestershire Council is currently consulting on its draft Cultural Strategy. You can find out more and respond on the Council's website.
Posted by Unknown at 18:48 No comments:

Councillor Sue Walker has set up a group, The Friends of Yate Station, to act as a strong voice for rail users. She says, "We hope to make a better case to get the rail companies to listen to us. Many of the unregulated off peak and advance saver tickets from Yate have gone up by as much as 11%!"

Better services are also desperately needed at the Station. Councillor Ian Blair explains, "We want Arriva Cross Country, who run services through Yate, to make an extra stop at our station during the rush hour. But the company is telling us it would not be worth their while to do so. We also need to get the Department of Transport to put more carriages on the route. The Government announced before Christmas that they would put in orders for extra carriages but negotiations are still going on about exactly which services will get them and how quickly. We think that the overcrowded services to and from Yate should be a top priority.”

The next meeting of the Friends of Yate Station is being held at 7.30pm on
Monday 9 February 2009 at Poole Court, Yate. Everyone is welcome to attend.
Posted by Unknown at 18:26 No comments:

The Lib Dems have called for land at the two schools to be safeguarded if the Academy proposals go ahead. Cllr Ian Blair said: "Should the schools decide to go ahead with the merger, then it is important that none of the land value is lost to the rest of the community."

"If the Council itself had closed one of the schools then it would keep the land and keep the money received from any sale of that land. But if the land is transferred to the Academy then they could choose to sell off the land to the highest bidder and use the money purely for their own purposes and that might not be in the best interests of the Yate and Winterbourne communities."

South Glos Council's Cabinet decided to publish closure notices for The Ridings and King Edmund Community School to allow them to re-open as Academies in September. There were 203 responses to the Council's consultation, with 55.7% against. More responses were received from Winterbourne parents and pupils, where a majority opposed the proposal, then from King Edmund Community School, where a majority supported the plans. The Ridings' own consultation ends on February 9th.
Posted by Unknown at 18:08 No comments:

Are you part of an organisation which helps people who have suffered strokes in South Glos? Then you may be interested in South Gloucestershire Council’s Stroke Strategy Fund 2009. The closing date for applications is Friday 30 January. More information on the South Glos website.
Posted by Unknown at 14:36 No comments:

At Tuesday's meeting, the following priorities were chosen:

The next meeting will be at 7.30pm on Wednesday 1st April in Westerleigh Village Hall.
Posted by Unknown at 14:23 No comments:

Plans to build a "multi-modal interchange (MMI)", more commonly known as a Park and Ride, off the heavily congested Wick Wick roundabout were thrown out by the planning committee yesterday.

The application lies just outside Westerleigh Parish and the Council failed to consult either Westerleigh Parish Council or local South Glos Councillor Claire Young, despite the major impact it could have on residents of Coalpit Heath and Kendleshire. Fortunately your local Focus Team spotted it was coming to the committee and Claire Young was able to attend the meeting to speak on behalf of local people.

While we clearly need Park and Rides to tackle congestion, they need to be near the residential areas to stop the traffic reaching the congestion hotspots, not at the hotspots themselves. The Wick Wick roundabout is already operating at full capacity and a Park and Ride here would encourage more people to drive down the A432 Badminton Road through Coalpit Heath and Kendleshire, rather than taking other routes from the Yate area into Bristol. It would be far better if people switched from cars to buses at Nibley and if residents of the new Emerson's Green East development used a Park and Ride within the development.

There is no agreement with bus operators to run services to the site and the existing ones are unreliable. The X42 is often full at peak hours before it even reaches Coalpit Heath, let alone Wick Wick. Given the difficulty of entering and exiting the site, it would add considerably to the journey time on what is supposed to be an express service. The 342 suffers serious delays due to picking up numerous people as it travels through town.

Questions were also raised over the safety of the roundabout if a 5th exit was added and new traffic lights installed a short distance to the west along the A4174.
Posted by Unknown at 13:27 No comments:

Plans to build a composting site near Tormarton will not now be considered by the DC (East) planning committee until March 5th at the earliest. You have until 26th January to comment on the latest documents submitted by SITA.
Posted by Unknown at 22:52 No comments:

The latest Safer Stronger Community Group meeting is tomorrow night, Tuesday 6th January, at 7.30pm in the Manor School. More information on the police website.
Posted by Unknown at 13:20 No comments: 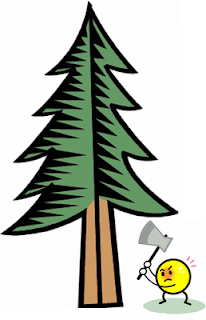 Wondering what to do with your real Christmas tree once you take the decorations down? Here's the advice from South Glos:

Providing they are not too large, then Christmas trees may be chopped up and put into your green bin. Branches or the trunk should not be more than 4 inches in diameter. Please make sure that you remove all decorations and that the bin lid closes. If your tree is too big for your green bin then it can be taken to your nearest SORT IT!* Centre where it will be separated out for composting.

Recycle your Christmas cards into trees!

Christmas cards can't go in your green box but you can recycle them in aid of the Woodland Trust at a number of stores. Tesco in Yate and Sainsbury's at Emerson's Green both have collection boxes. Other stores collecting are WH Smith, TK Maxx and Marks & Spencer. You can read more about the Woodland Trust on their website.

While you're recycling cards, you might also want to take the stamps from the envelopes into local charity shops.
Posted by Unknown at 14:37 No comments:

Happy New Year from your local Liberal Democrat Focus Team.
Posted by Unknown at 11:26 No comments: