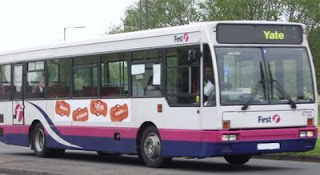 At last week's meeting of South Glos' Transport select committee, Cllrs Pat Hockey, Howard Gawler and Claire Young told Justin Davies of First Bus about the problems some people are experiencing with the revised bus timetables. The company will be fine-tuning bus times now that the recent changes have bedded in so if you have any concerns, let your Focus Team know as soon as possible.

The good news is that many of the buses that serve our area will be replaced next year. The older buses will be withdrawn and replaced by some three-year-old vehicles from elsewhere. Second-hand, but better than what we've got at the moment.
Posted by Unknown at 17:02 No comments: 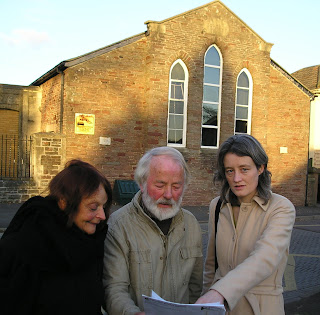 Parents and other residents now have until Friday 19th December to have their say on plans to merge Brockeridge Infant and Highcroft Junior Schools.

There was widespread concern at the public meeting that residents were being asked to support the merger without any idea of whether the merged school could continue to use both sites or how pupils would be accommodated if all ages were on the Highcroft School site. Many were worried that it would mean their children being taught in “temporary” classrooms.

It is crucial that people fill in the questionnaire and make their views clear to the Council and Governors. If you support the merger, but only in certain circumstances, for example:

then you need to answer "No" to question 1 and use the space provided for reasons to say "unless...". There is no space for reasons if you say "Yes".

The deadline was extended after parents complained and Councillors Claire Young and Pat Hockey took their concerns to the Council's Cabinet. Your views can make a difference - reply to the consultation now!
Posted by Unknown at 12:46 No comments:

Yesterday local Councillor Claire Young took parents' concerns about the Brockeridge-Highcroft consultation to the Council's Cabinet. She explained that people wanted more information to make a decision and that the presentation given at the public meeting did not match the consultation document. Officers promised to look into whether they need to provide parents with updated information and extend the deadline to give people time to consider the new information.
Posted by Unknown at 16:13 No comments:

SITA's application to build a composting site near Tormarton will now not go to the planning committee until 5th February 2009 at the earliest.
Posted by Unknown at 16:10 No comments:

SITA will shortly be submitting additional information to the Council regarding such issues as odour management/bio aerosols, public rights of way, highway safety and landscaping. This means there will be a further consultation and the earliest that the application could be considered by the committee is 8th January 2009.
Posted by Unknown at 23:37 No comments:

Last night saw a packed public meeting at Highcroft Junior School to discuss the proposed merger of Brockeridge and Highcroft Schools. There was clearly a great deal of concern about the uncertainties in the process and the information being provided to parents and interested members of the public.

It is very important that everyone has their say on the proposals before the deadline of 5th December. You can respond to the consultation online or email, write a letter or return the form on the back of the consultation document.

It would help your local Focus Team to represent your views better if you also contacted one or more of the team:

It's a busy time for roadworks in the Kendleshire area. Firstly, there are two way temporary traffic signals outside the Golden Hart on Down Road to enable cables to be laid. This should be done by 21 November. Secondly, emergency road repairs are being carried out on the A432 Badminton Road between the Viaduct and Cuckoo Lane. These roadworks are due to be completed by 27 November.
Posted by Unknown at 01:00 No comments:

Your chance for online chat with S Glos police chief

People living and working in South Gloucestershire have the chance for an online chat with the man in charge of local policing later this month, says the .
Avon and Somerset Police website
Chief Superintendent Andy Francis is the South Gloucestershire Police District's commander. He will be available for a webchat on the police website between 6.30 and 8pm on Wednesday November 26 2008. C/Supt Francis said he hoped local people would take the opportunity to log on and have their say.

He said: "We are working really hard to make sure our priorities reflect the needs of local communities. We know people are concerned about anti-social behaviour and we're tackling this with Safer South Gloucestershire and other partner agencies.

But C/Supt Francis stressed that the most important resource for police was local people.

He said: "It's vital that people get involved. The key to making our neighbourhoods safer and stronger lies with the residents. We need them to tell us about the problems that concern them the most – and help us find lasting solutions.

"One of the best ways to do this is to come along to your neighbourhood's Safer Stronger Community Group meetings, held regularly in a local venue. Details can be found by visiting www.avonandsomerset.police.uk/inyourarea

"The Government's recent 'Not in My Neighbourhood' week of action showcased a number of initiatives where local people have taken the lead and really made life better for everyone in their neighbourhood.

"Residents of a road In Filton have clubbed together, with the support of the neighbourhood team and Safer South Gloucestershire, to install lockable gates preventing access to the lanes behind their homes.

"This has helped to cut crime and make residents feel safer – but it could not have happened without the active support of the locals."

To make your point to C/Supt Francis simply visit www.avonandsomerset.police.uk between 6.15 and 8pm on Wednesday 26th and follow the link.
Posted by Unknown at 00:54 No comments:

Email ThisBlogThis!Share to TwitterShare to FacebookShare to Pinterest
Labels: police

From 9th to 12th November there will be temporary traffic lights in place of the permanent ones at the Shorthill crossroads while cable work is carried out.
Posted by Unknown at 23:55 No comments:

For the next few weeks, the Council's Street Cleansing Team are suspending their routine sweeping programme to concentrate on clearing leaf fall. If you are concerned about an area with high levels of leaf fall please contact the Streetcare help desk.
Posted by Unknown at 23:52 No comments:

If you follow the track that runs off to the west at the Nibley Lane-Westerleigh Road junction you come to a footpath on the other side of the railway line. This has had to be closed where the path crosses a bridge as the bridge has collapsed. It is planned to reopen on 27th November.
Posted by Unknown at 23:48 No comments: