"Cautious optimism" on the Westerleigh smell 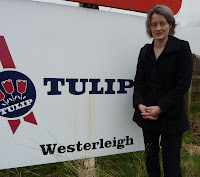 At the latest meeting of the working group last Thursday:

• The Environment Agency representative expressed cautious optimism, as there have been no complaints since 12th May and monitoring in the sewers showed only very low levels of potentially odorous gases. There has been a very significant improvement since last autumn.

• Tulip have continued to fine tune their processes and have now found a filter set-up that works well with the chemical dosing system they recently started using. They continue to carry out daily filter checks and to replace filters as necessary.

• The changes Tulip have made will be included in a variation of their permit that is being agreed with the Environment Agency in the next couple of months.

• Wessex Water has been investigating the issues previously noted on the east of the village. Since early May there have only been small, short-lived peaks of odorous gases in the sewers there and no complaints.

It was agreed that the working group would continue to communicate by email but only hold further meetings if there were more complaints. If you do experience a bad odour in the village, you can contact the Environment Agency 24 hours a day 365 days a year on their freephone number 0800 80 70 60. You can also contact Claire at claire.young@southglos.gov.uk or the Parish Clerk at westerleighpc@btinternet.com
Posted by Unknown at 09:15 No comments:

In the latest Focus, we reported on the strange road markings that suddenly appeared on Beesmoor Road without any consultation. Pat and Dave, pictured left with concerned residents, took it up with Street Care and yesterday the lines were washed away. 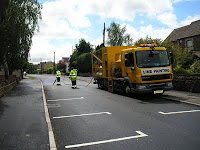 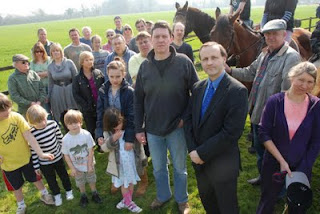 You can continue to follow the campaign at http://www.saveenginecommon.co.uk/
Posted by Unknown at 09:15 No comments:

Could you help your community?

Now is a great time to be looking for ways of becoming more involved in the community in Coalpit Heath and Frampton Cotterell.

There are currently 4 vacancies on Westerleigh Parish Council in the Coalpit Heath ward. Find out more at http://communities.southglos.gov.uk/sites/westerleighpc .

The Friends of Ram Hill Colliery are looking for new members and someone to chair the group. Please contact Steve Hillyard at s.hillyard00@btinternet.com .
The Joshua Group, which cares for people with severe learning diffculties and runs every other Tues evening from 6-8pm, is looking for volunteers to help staff the group. For more info contact Helen at the Zion Church office 01454 776618.
Posted by Unknown at 09:15 No comments:

If you belong to a local community group looking for funding you have until noon on 20th June to apply for the 2011/12 round of Capital Grants. More information on the South Glos website.
Posted by Unknown at 23:30 No comments: 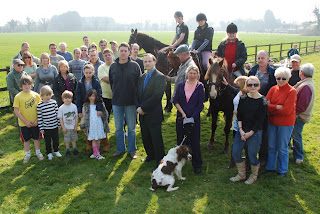 Time is running out if you want to sign Mike Keenan's petition against the proposed 350 house development + industrial units at Engine Common. He is planning to present it at the first meeting of the new South Gloucestershire Council this Wednesday. To sign the online petition visit http://www.saveenginecommon.co.uk/ .

We have now heard that the Core Strategy Inquiry is unlikely to take place before September. The developers could of course decide to put in a planning application before then.
Posted by Unknown at 09:15 No comments:

New aerial runway at The Park 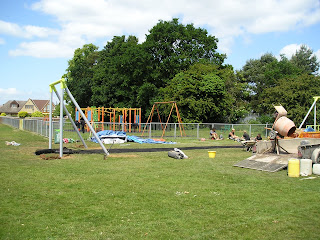 Young people in Frampton Cotterell said an aerial runway was their top priority for new equipment in our parks when Village Action surveyed local schools, clubs, scouts, guides and other groups. The household surveys also showed that people wanted more adventurous equipment, with Kingsgate Park, Yate being held up as an example.

Frampton Cotterell Parish Council agreed at their meeting on Monday 16 May that the runway should be installed at The Park, School Road next to the existing play area after Beesmoor Road Playing Field Committee decided they could not accommodate it there.

Pat and Dave Hockey have used part of the funding that they have been allocated to spend in their Frampton Cotterell Ward to pay for the runway after their own recent survey had indicated substantial support across the Parish from residents who felt the quality of our play facilities locally is poor in comparison to other areas.

The photograph shows the supports for the cable that were cemented in place on Thursday 19 May ready for the cable to be installed early in the week commencing Monday 23 May. The runway will be risk assessed to ensure it is safe before it is commissioned for use.

The new Beat Manager for Frampton Cotterell, Finbar Simmons, has been asked to keep an eye on the runway when it goes into use ahead of half term since it is likely to be popular with local youngsters and we want to ensure that local residents are not disturbed, especially after dark.

The runway has been positioned more than 60 metres away from the nearest properties to minimise the risks of disruption to residents – the suppliers and installers state that a distance of at least 20 metres is required.

Pat and Dave hope that local children and families will have a lot of fun using the ‘Cablerider’.

Traffic lights in Westerleigh on Monday

There will be temporary traffic lights outside Copp Cottage on Westerleigh Road in Westerleigh on Monday 23rd May to facilitate tree cutting.
Posted by Unknown at 16:09 No comments:

A mix up over rooms meant that people with mobility problems found the disabled access locked when they went to vote at the Manor Hall on 5th May. Claire Young says, "I took up this issue after last year's general election and it was agreed that the polling station would switch to the Newman Room, with the pre-school moving to the Jubilee Room. This way everyone would enter via the ramp and the door would not be locked. Unfortunately this did not happen. I alerted electoral services to the problem just after 7am on polling day and a notice was posted on the door and staff offered help where it was needed.The Head of Electoral Services has promised to investigate to make sure this problem doesn't happen again."
Posted by Unknown at 09:15 No comments:

Did you witness the accident at Mayshill today?

Avon and Somerset Police are looking for witnesses to the accident near the New Inn that closed the A432 Badminton Road today. More information can be found on the police website.
Posted by Unknown at 20:52 No comments:

Problems in lane between Wayleaze and Alexandra Road 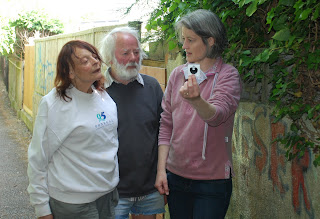 Claire Young shows Pat and Dave Hockey drugs bags found in the lane between Wayleaze and Alexandra Road. She has reported the bags
to the police and Safer Stronger South Glos. People living nearby are concerned about the vandalism and antisocial behaviour that goes with the drinking and drug taking. Please report any incidents to the police on 0845 456 7000. Claire asked Street Care to deal with some stones that were removed from a wall and left in the lane.

Do you travel to Yate by bus?

If you travel to Yate by bus, you will probably have been following the saga of the appallingly designed new "bus station". South Glos Council are asking for your comments on three options but they are lacking in detail and don't address some of the key problems, such as the lack of shelter and poor seating. The Yate Focus Team would like to hear your views on the plans - find out more on their blog.
Posted by Unknown at 17:26 No comments:

Thanks for backing your Lib Dem Focus Team

The full results of the South Gloucestershire Council elections in the Ladden-Frome area were:

Other ward results are available from the South Glos website
Posted by Unknown at 06:54 No comments:

Email ThisBlogThis!Share to TwitterShare to FacebookShare to Pinterest
Labels: election

Thursday 5th May is Polling Day.
We have had a warm reception over the past weeks on the doorstep and we are grateful to all those who have told us how much they value the hard work the local Focus Team does all year round. Please help us to continue that work by voting for John O'Neill in Charfield Ward, Pat and Dave Hockey in Frampton Cotterell Ward, Howard Gawler in Ladden Brook Ward and Claire Young in Westerleigh Ward.
Polling stations are open from 7am to 10pm. Your vote only counts when your ballot paper is in the ballot box. If you have a postal vote and have not yet completed and returned it, you can still take your ballot paper in person to the polling station on Thursday.
Your local Focus Team will also be voting "YES" for a fairer voting system.
Posted by Unknown at 07:41 No comments:

Email ThisBlogThis!Share to TwitterShare to FacebookShare to Pinterest
Labels: election 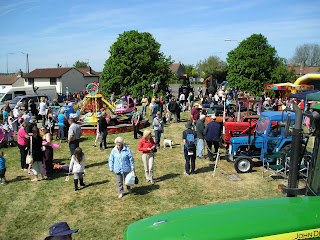 The Iron Acton May Day celebrations were once again a huge success. Local Councillor Dave Hockey said, "Pat and I had a great time along with the crowds – loads to see and to buy! Fun for all age groups. Well done Iron Acton." 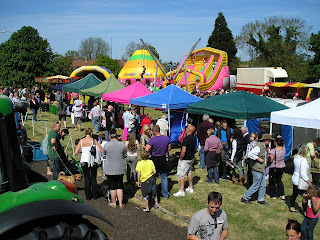