At Wednesday's Council meeting, the Lib Dems tabled an amendment to a Council motion on housing numbers, demanding that the Council investigate taking legal action if the Secretary of State doesn’t reduce the housing numbers destined for South Gloucestershire.

The number of homes that would have to be built each year is highly unrealistic but if the targets are not met there is a real danger that developers will be able to win appeals to build on land not earmarked by the Council for development.

Another concern is that the minister's recommendations would not ensure that the infrastructure needed to support the new homes would be built first. The Lib Dems succeed in gaining three party support for their motion demanding funding from Government to give first class transport for South Gloucestershire residents.
Posted by Unknown at 14:12 No comments:

South Gloucestershire Council has agreed to look into erecting a wind turbine on land adjacent to the new Council offices on Badminton Road. If installed, it would provide part of the power needed for the offices.
Posted by Unknown at 14:05 No comments:

Local people horrified at a Government panel's recommendation that 30,800 new homes should be built in South Gloucestershire by 2026 will be shocked to hear that the Secretary of State has now recommended increasing that number by 2000.

Lib Dem Leader and councillor for Yate Central Ruth Davis explains, “I am horrified that the Minister has ignored the huge outcry from the public against the proposed housing within South Gloucestershire. We have already said that an increase of 23,500homes would be difficult to deal with properly if not impossible. In reply the Government panel suggested 30,800. Now instead of reducing that number to a manageable and sustainable level of growth the Secretary of State Hazel Blears MP has put it up further. As far as we’re concerned she’s living in the house of commons fantasy land.”

“Our worst fears have been founded with the figure going up even further. As there will now be a 12 week public consultation period on these proposals I urge the public to put their views forward in writing as it appears the Minister is just not listening.”

“We need time now to analyse these new figures in detail as whilst it appears the number for Yate are reduced to 3000 additional houses, this means 4000 more houses for the rest of South Gloucestershire. Being swamped with a flood of new properties was not what Yate residents wanted but they certainly wouldn’t have wished 4000 upon their neighbours in the rest of South Gloucestershire.”

The Lib Dem planning spokesman Cllr Pat Hockey said, "The Government needs to think again about the totally unrealistic number of new homes being proposed for South Gloucestershire. It is ridiculous that the Minister has not taken into account that development appears to have ceased on a number of major sites in South Gloucestershire due to the downturn in the housing market. This makes these housing targets unrealistic, unachievable and pure fantasy figures." 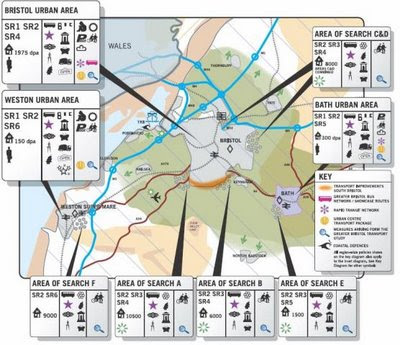 The new traffic signals at the junction of Westerleigh Road and Shorthill Road will be switched on tomorrow, Tuesday 15 July.

There will be some testing to start with and the traffic light specialists will be there through the first afternoon and morning peaks to fine tune the system and make sure everything is working OK.

Hopefully the lights will reduce the accident rate on this very busy junction.
Posted by Unknown at 23:28 No comments:

Sadly Vodafone have won their appeal against the planning committee's decision to object to their plans to erect a phone mast near the junction of Woodside Road and Badminton Road.

On the effect on the street scene, the inspector says:

“Inevitably, any utilitarian roadside structures such of[sic] those proposed will detract from the street scene, adding visual clutter, but in my view the effect on the character and appearance of the area would not be at all serious.”

On residential amenity he says:

“...it seems to me that the public perception of the effect of the pole on amenity is strongly influenced by what it would represent, and concern about possible health effects, rather than its likely appearance.”

He found no reason to doubt the need for the mast and was satisfied that Vodafone had undertaken a sufficiently thorough assessment of alternative sites. With regard to the health concerns, he noted that the proposed mast would meet ICNIRP Guidelines and “found nothing specific to this case that would justify taking a different approach to health considerations.”

This decision, which you can read in full online, means that Vodafone now have approval to erect the mast as proposed.
Posted by Unknown at 22:54 No comments:

Yate International Festival is taking place tomorrow (Saturday 12 July) from 10.30am-5.30pm at Yate Heritage Centre and St Mary's Church and Green. There will be a free programme of performances, workshops and activities celebrating different cultures. More information here.
Posted by Unknown at 23:19 No comments:

SITA have clarified the revised lorry movement figures for the proposed composting facility at Tormarton, reflecting the fact that from next year green bins will be collected weekly rather than fortnightly. They are:

3 bulkers per day removing compost product = 6 movements. Compost removal will remain the same regardless of weekly or fortnightly collections

In addition there will be 6 staff generating 12 light vehicle movements per day.

SITA have still to provide the detailed breakdown of the routes those lorries will be using.
Posted by Unknown at 23:15 No comments:

At tonight's meeting, the following priorities were agreed:

1. Upgrading youth facilities in both Frampton Cotterell and Westerleigh parishes.
2. Continuing to work on the motorbike problems at Dodmore Farm.
3. Tackling speeding in the Quiet Lanes Scheme, Perrinpit Lane and Westerleigh.
Posted by Unknown at 23:44 No comments: