Cardboard chaos - let's get it sorted

Your Focus team has been pushing for a better way of collecting cardboard for recycling.

When the Council stopped you putting cardboard in your green bin in November, they said at first that cardboard had to be put inside a larger cardboard box or placed under a bin. When people complained, they told those people they could also use their own plastic box or a strong bag, such as a "bag for life". Unfortunately they didn't tell everyone. 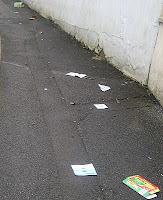 Cardboard is very light and blows away easily if it is not secured in some way. On one recent windy collection day, Claire Young and a neighbour ended up chasing someone's cardboard along the street, trying to gather it up and sort out the mess.

Dave Hockey, who led the Lib Dem campaign for plastic bottle and weekly food waste collections, said, “At meeting after meeting, we told the Tory administration that the new arrangements for cardboard were flawed. Local people want to be able to put out their cardboard and know that it won’t end up strewn along their road and in their neighbours’ gardens. This problem needs to be sorted, and quickly. All residents need to be told what is happening, not just those who have complained to the Council.”
Posted by Unknown at 12:15