Have your say on Westerleigh Rd/Shorthill Rd plans 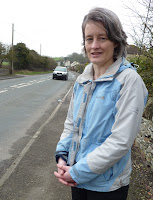 You have until 31st March to have your say on plans for safety improvements on Westerleigh Road and Shorthill Road in Westerleigh. You can view and comment on the proposals online. Don't forget to comment on those parts of the plans that you support as well as raising any concerns you might have. 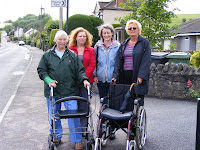 The plans also try to address some of the issues raised in the disability walkabout that took place last summer (see left). As well as the pedestrian refuge on Shorthill Road, there is a proposal to build out from the corner of the village green to enable dropped kerbs to be put in. This would enable everyone, including wheelchair users, to cross at the point where visibility is greatest.
Posted by Unknown at 16:26