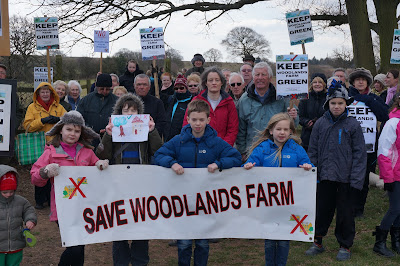 A large crowd of local people turned out this morning to object to plans to build 380 houses on land at Woodlands Farm, Coalpit Heath.

Members of the DC (West) planning committee were visiting the site to see the impact the proposed development would have on the landscape, environment, roads and the local communities. Standing by the kissing gate that gives access to the public footpath across the site, officers introduced the application before Barratt Homes' agent spoke about their plans.

Westerleigh councillor Claire Young spoke on behalf of residents, highlighting the important landscape features such as the dry valley, mature trees and Blackberry Brake. Claire spoke of residents' concerns about hundreds more cars travelling along Badminton Road and Park Lane and the importance of protecting not only the village feel of Coalpit Heath and Frampton Cotterell but also their separate identities. She also raised concerns such as the impact on wildlife, drainage, local heritage and the public right of way across the site.

Richard Merrick, organiser of the Save Woodlands Farm action group then spoke, welcoming the strong line South Gloucestershire Council took on protecting Woodlands Farm at the recent session of the Examination in Public on the Core Strategy. He said that if the council turns down the application, residents will give their full backing at any appeal.

After that the Chair, Dave Hockey, allowed a number of others to make points that hadn't already been covered. The Clerk from Frampton Cotterell Parish Council highlighted their concerns and Jen Dunford from Village Action and Walking to Health talked about the Parish Plan and the importance of the footpath for the walks she leads. Long time resident Mr Angell asked the committee to protect the land for food production.

Stella Beecher spoke about the link with author Dick King-Smith and his famous book, The Sheep Pig, which became a Hollywood blockbuster. Former Westerleigh councillor Alan Bracey asked the members to make sure they looked closely at the proposed junction on to Badminton Road. Other residents raised concerns about wildlife, road safety and keeping Kendleshire, Coalpit Heath and Frampton Cotterell as separate communities.

Dave Hockey said the committee would travel out via Park Lane, to consider the road issues and view the site from there, and then go up the Badminton Road into Coalpit Heath to see where the new junction would go. Having closed the public meeting, the members of the committee then walked along the footpath and back so that the planning officer could point out significant features and answer any questions they had.

The decision will be made at a future Development Control (West) meeting, possibly in May or June.

You can see more photos from the site visit here.
Posted by Unknown at 14:58