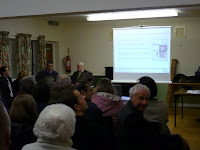 Westerleigh Village Hall was packed on Monday night to hear SITA representatives give a presentation on their plans for an In-Vessel Composting facility off Batchfield Lane near Westerleigh. During the question and answer session that followed, residents raised fears about the impact on the Green Belt, the effect on the bridle way next to the site, disturbance to the neighbouring crematorium, the impact the HGV traffic generated would have on local houses and roads and the risk of smells and health hazards.

Claire Young challenged SITA's assertion that all of South Gloucestershire outside of towns and villages was Green Belt (it is not) and asked whether SITA had really considered all non-Green Belt alternatives. She also raised the issue of the flood risk at the site.

At the end attendees voted unanimously to oppose the plans.
Posted by Unknown at 23:53