Visit to an In-Vessel Composter

On Friday Claire Young, along with other South Glos Councillors and Parish Councillors, visited an In-Vessel Composter in North London, similar to the one proposed for farm land near Westerleigh.

Around 8-10 rubbish collection lorries would each make 2 visits to the site a day, one mid-morning and one in early to mid-afternoon, following the collection rounds. The lorries travel up a ramp so that they can drop the waste down into the reception building. At the Westerleigh site, the drop-off would happen in an enclosed area to minimise odours. When you consider the size of the lorry in relation to the height of the building that's visible and bear in mind that the drop off point is quite high above the floor of the building, you get some idea of how of the overall scale.

Inside the reception building a digger places the waste into a shredding machine, which also sprays the shredded material with water that has leached out of the composting process before depositing it in a heap. The building would be around 11m high but could possibly be sunk up to 1.5m into the ground.

In the last hour and a half of the working day, the shredded waste is transferred to a tunnel with a goretex roof and shut in. The temperature increases to around 80 degrees celsius and is then lowered to 50-60 degrees. Fans located in a tunnel beneath the compost tunnels aerate the compost through rows of holes in the floor. The compost remains there for two and a half weeks, longer in winter, before being transferred to a second tunnel.

When it has finished in the second tunnel, the compost is moved to the Maturation Building. Plastic and metal contaminants are removed (people often throw cutlery in with kitchen waste) and if necessary compost can be processed for longer. The people and machinery in the pictures give some sense of scale. 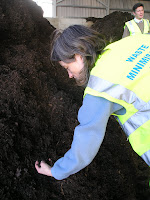 In this picture, Claire Young examines the final product, which is primarily aimed at agricultural use. It would be taken away from the Westerleigh site in "bulkers", articulated lorries. The small amount of material (< 1 percent) that has to go to landfill would either be taken out in the emptied collection vehicles or saved in a skip and moved out less than once a week.

In terms of noise, smell and public health concerns, the visit was reassuring. The message was that the management of the operations was the key and the company that would build the facility would provide help and training to SITA, who would run it. They have a good record at this site, having had no complaints from local residents in 2007.

The sheer size of it (and this facility wasn't quite as large as the proposed one at Westerleigh) was still a concern for those who would be able to see it from their homes. This facility was located on an industrial park in North London, the Westerleigh one would lie in the Green Belt.
Posted by Unknown at 23:41